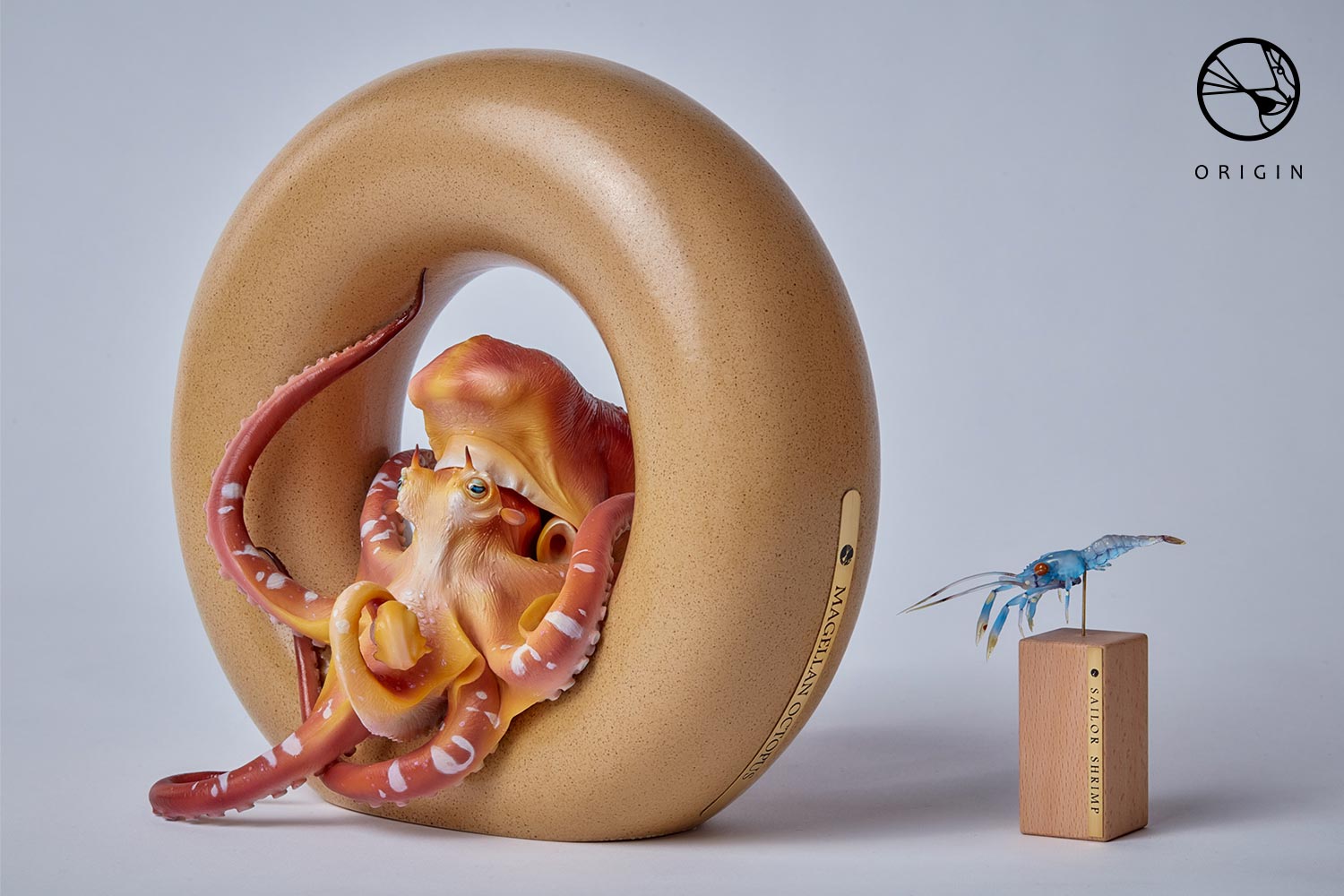 "Origin" represents the combination of imaginary and authentic animals from nature.

This style of art from David Zhou presents a virtual animal world, following the concept of "The Origin of Species." By continuing to add more animals from exotic lands, skies and oceans, we will explore a rich world with their lifestyle and environmental roles.

David Zhou is a traditional animal sculptor and designer of imaginary animals who lives in Shanghai with his family.

"When an Adventurer Becomes a Collector..."

The Magellan Octopus is born with smooth and soft skin and a bulge on its back. Average length of the species is around 15cm.Â There is an obvious boundary between the head and the body, which, combined with the patagium, looks like a circle of brim, like wearing aÂ saying cap when seen from a distance. That's how it got its name, Magellan Octopus.

Magellan Octopus is the kind of species that is rich in spirit of adventure, because they are often leaving their own nests to look for new living environments. It’s very common to occupy the caves, from the other octopi, although they never stop collecting the colorful and bright shells, corals and rocks. They are addicted to collecting these because they are extremely sensitive to colors.

Extremely different from the other octopi, Magellan Octopus has seven tentacles, with one of them evolved to be a unique weapon, a slingshot foot. By controlling the muscles on its wrist, Magellan Octopus can shoot out a small piece of stone. The prey can be easily knocked out and threatened. Magellan Octopus mainly eats small crustaceans, but its food does not include the Sailor Shrimp, which helps its captain to clean its nest. The pattern and color of Sailor Shrimp are also its favorite style; maybe this is the reason why it takes at least one shrimp as company for each move.

Sailor Shrimp is transparent blue, and its body is short but its head and carapace are much large. Male and female sailor shrimp are about the same body size. The body color of male shrimp is lighter than the female, while the male has light brown eyes and the female shrimp has yellow-white ones.

The male Sailor Shrimps are fed by the skin secretions from their "captain," Magellan Octopus. They will always be with the MagellanÂ Octopus except for during their breeding time.

*IMPORTANT* The Early Bird and Regular Version may be closed anytime without advance notice when it reaches our edition size. We will not do a second run, so don't miss out!